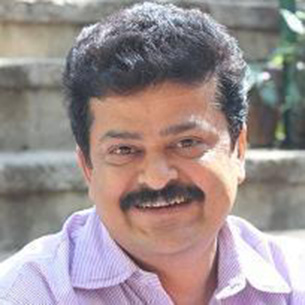 Mandya Ramesh is an Indian actor, comedian, director and theatre personality who mainly works for the Kannada films and theatre. He started his theatre career in 1982 through a theatre workshop conducted by Ashok Badaradinni, a graduate from National School of Drama. He has worked for Neenasam theatre institute from 1984 as an actor and technician. He then joined Rangayana in 1989 and worked under the guidance of B. V. Karanth for around 9 years. He debuted into acting in films in 1995, with a popular role in the film Janumada Jodi alongside Shiva Rajkumar. In 2002 he founded his own school for theatre arts, Natana and conducted many workshops through this institute in various parts of Karnataka. He has also written two books, Rangavalli and Kanavarike that are related to his life in theatre. He has acted in around 150 films among which Janumada Jodi, Nagamandala, Kanasugara, Mata, Oggarane are prominent. He has also appeared in TV series like Janani, Manethana, Chi Sou Savithri. The popular plays he has directed include Mruccha Katika, Sankranthi, Yuyuthsu to name a few. He is currently serving as the founder director for NatanaSchool of Theatre arts situated in Mysuru. He also appears as Mandya Muddesha in the popular Kannada sketch comedy show Majaa Talkies, hosted by Srujan Lokesh currently being aired on Colors Kannada channel.